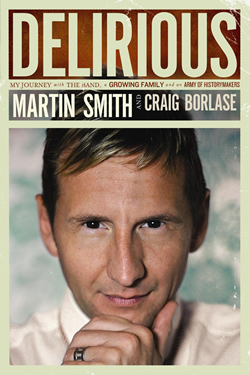 In this memoir, Smith talks of his lifelong understanding that God had something planned for him.  Starting with the early days of Delirious? and how they really just wanted to worship.  I remembered first hearing the Cutting Edge album and thinking wow this is a much different worship album.  Still one of my all time favorites.  Smith talks all about that process and how everything kept falling into place.

A quote from the book “This is the best advice I can give a songwriter: Keep working, don’t satisfy yourself with things being good enough, but hone and craft and polish until you’ve got nothing left to give.

As the band grew in fame they tried to make more music that would be played on regular radio stations so they could spread the news of hope and love.  They at one point had switched from playing at Christian events to playing in clubs and more secular venues.

Smith goes into great detail about the ideas behind the new albums and how they were trying to make it work.  It is a tough line to walk teetering between Rock band and Christian band.  When they were opening for Bon Jovi or Bryan Adams, Delirious? played songs of love and had a whole new group of people worshiping.

As years went on and Delirious? traveled all over the world they realized they knew little of poverty, they also found how disconnected they had become with their local church.  Early on they tried to be there to run worship once a month.  But that was no longer feasible.  When the band finally played their last set they did it on their terms.

One thought on “Delirious: My Journey with the band, a growing family,and an army of history makers”